Q: Are there any similarities between you and Reverend Dean?

A: At first I thought we didn’t share many similarities, but my wife recently listed far more than I realized. I suppose that’s inevitable, given that authors draw on their own history when they create characters. In addition to rain, the reverend and I love steam showers, reading and banana pudding. We also both drive cars that are way too old.

Perhaps most of all, Reverend Dean and I share similar sleep habits. I never go to bed before 1:00 AM, and when I wake up I have several mugs of coffee before I talk to my wife, on the phone or to anyone else. I’m such a night owl, in fact, that for almost a year while in law school I literally went to bed at dawn and woke up at dusk. I’ve frequently thought that I would make a great vampire. (Although some might say the combination of blood-suckers and lawyers is a bit redundant…)

Q: What attracts you to the “impossible crime” sub-genre?

A: Since this term is defined in the “Suggested Reading” page of this site, I’ll assume that everyone knows what this phrase means. But in general, it’s more of a puzzle for the reader and more of a challenge for the writer. In most mystery novels, the reader knows most of what has occurred right off the bat: Who was murdered, how the person was murdered, when it happened, and (often) why it happened. In fact, frequently the reader even knows who the murderer is; the novel is more about how the police (or the detective) find the killer.

But in a story featuring an impossible crime, the reader is faced with far less information, so it’s more of a brain-teaser. Rarely does the reader know who did it, by definition the reader doesn’t know how it was done, and—since some involve a misdirection in time, like the Reverend Dean story “Murder at an Island Mansion”—the reader doesn’t even know when the murder occurred.

As a result, the reader has to enjoy a competition with the writer. The author is throwing down the gauntlet, and saying in effect: “Sure it’s improbable, but I’ve thought of one way this crime could actually happen. Can you solve it before I tell you the solution?”

I’ve enjoyed this type of story for decades, so it was a natural that I would write about it if I had the chance.

Q: Why did you choose a retired reverend to act as the protagonist in your stories, instead of a different occupation or a different age?

A: The age was easy. I needed someone who had time on their hands, and a young or middle-aged person with a career simply didn’t meet that criteria. But I also wanted someone who had a wealth of experience to draw on, and Reverend Dean literally has quadruple the experience of a 20 year-old.

The occupation was also easy, but a bit harder to explain. A retired pastor has seen a lot of life, and has a perspective that, for example, a lawyer or a policeman doesn’t have. That’s not to say that those professions don’t have valuable experiences, but they’re different—and I would argue, not as balanced—as a reverend. Policemen see people at their worst, and lawyers only see people vis-à-vis a specific problem they want help with. But a pastor who has seen people day-in and day-out for three decades has seen all aspects of an individual, and that gives him the kind of expansive perspective I wanted.

Moreover, all of the stories feature murders; the most heinous act one human can inflict upon another. A pastor has a moral viewpoint on that act that’s quite different from someone in the criminal justice system. The “tough but tender” cop/lawyer/private eye formula is pretty common nowadays, so I wanted a character with a fresh perspective.

Q: How did you choose the setting of Reverend Dean?

A: I wanted an isolated town, and the western side of the Cascade Mountain Range seemed ideal, because it also afforded Reverend Dean access to metropolitan Seattle should the storyline require it. As a result, although Dark Pine is fictional, it is set in western Kittitas County, Washington state. For some reason this area—and the eastern part of adjacent King and Pierce counties—has spawned several eerie stories, from the outstanding TV series Twin Peaks (filmed in North Bend, King County), to the computer game Alan Wake, to the intriguing graphic novel Runoff (set in eastern Pierce County). In fact, the less spooky, but still quirky TV series, Northern Exposure was filmed in Roslyn, Kittitas County; relatively near to where I envision Dark Pine to be. However, the weather of Dark Pine is unique; with far more rain and fog—and less snow—than other parts of this county. 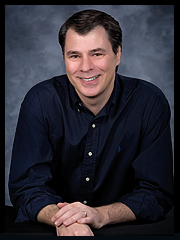 Although Hal lived in several states as a child, he has spent most of his adult life in Washington state. He’s married to a wonderful woman who’s also his best friend.

He loves football, reading and, yes, the rain.